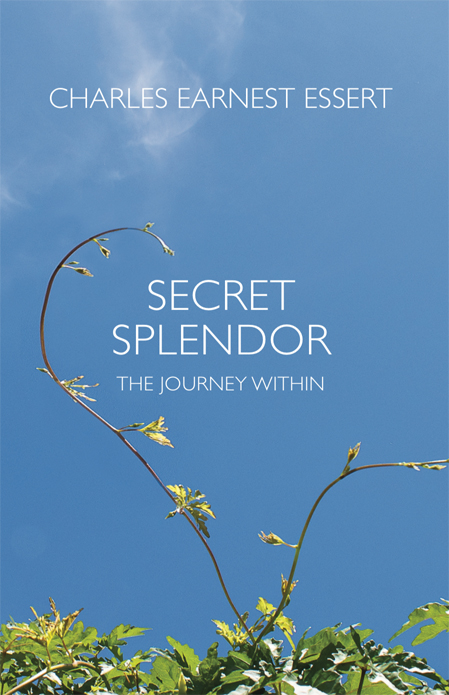 “Secret Splendor is an honest, humble, and articulate testimony on the nature of Reality as encountered by an authentic mystic. ... As both a spiritual autobiography and a textbook on mystical living, Secret Splendor is a masterpiece for those who have eyes to see and ears to hear.”

Throughout the ages, enlightened individuals have endeavored to convey their extraordinary discoveries about real life in the spirit. Charles Essert was one such spiritual pioneer, and Secret Splendor is his compelling account of the ever-present spiritual truth found in the midst of human illusion. Shattering one false concept after another, Essert deeply penetrates the veil of mortal, material, and finite sense to reach the infinite kingdom of Soul. This remarkable book details a challenging yet joyous path to the mystical awareness and experience of that very kingdom within each of us.

"Secret Splendor is an honest, humble, and articulate testimony on the nature of Reality as encountered by an authentic mystic. With great determination and awe-inspiring success, Charles Essert embarked on the ultimate adventure inward and revealed the profound, universal truths he learned through actual experience. Essert's book is encouraging as well as exciting because it shows us that we too can explore, experience, and enjoy the realm of grace and truth that is our own Divine Consciousness.  As both a spiritual autobiography and a textbook on mystical living, Secret Splendor is a masterpiece for those who have eyes to see and ears to hear."

Ken Lazdowski, practitioner and lecturer of spiritual principles
based on the teachings of Jesus and the mysticism of Joel S. Goldsmith

My Uncle: A Personal View

It has been said that we all go through a curtain into our private spiritual awakening, however, very few of us travel as deeply into the space beyond that curtain as did my uncle, Chuck Essert.  The serenity of his later life as a farmer of rabbits in a grove of palm trees shows that he gained a satisfied relationship with eternity.

We lived in Denver when I was a boy, and our family spent many Saturdays picnicking in the Rocky Mountains.  Sometimes Uncle Chuck would accompany us.  His favorite thing to do was to venture up the rocks a little way and sit in solitude, gazing into the distance.  My mother would lay the food out and he would return to eat and sing and chat; he was a very amiable fellow.  I would not have thought of him as a recluse or a star-gazer. I certainly would not have guessed that he was in the midst of a spiritual awakening, nor that he would come to document that experience so vividly in this book.

Many years later, as teenager, I visited my uncle at his Angora rabbit farm in El Cajon, California.  He kept a thousand rabbits which he and his wife, Gwen, had to feed and shear daily.  Chuck offered to let me shear a rabbit, but I was clumsy and embarrassed by my lack of precision. He assured me that it was all right; he seemed to know that my errors, in the light of eternity, were excusable.  His grasp of the universe impressed me greatly but I was too intimidated to engage him in any talk of theology. I regret not seizing that moment to ask him about enlightenment, but perhaps it was for the best as I was just two years away from experiencing my own spiritual awakening.  My awakening was totally different.  It was full of violence and pain.  Apparently, each of us must find our own way with trembling and awe.

Chuck had several fine brothers and his favorite one was Paul, my father.  Paul in turn taught me how to “sit and not think” in our back yard.  Today we call that meditation.  This type of exercise often leads us into a vast experience of spiritual growth.  Having no knowledge of my uncle’s Secret Splendor, but with a firm foundation in meditation, I traveled by motorcycle to Guatemala, a journey that opened the way to my own spiritual encounters with the universe that is beyond the curtain of awakening.  Though my uncle and I are alike in the beginning and have had similar conclusions, as you will see in his book, Chuck’s experience was uniquely vivid and much broader.

To those of us who were not aware of Chuck’s inner world, he appeared to be a very interesting but rather normal man.  He joined the Navy in WWI.  He played in a band on Admiral Dewey’s flagship and earned money sewing uniforms for his shipmates.  On Saturday nights, he and his shipmates would commute from El Cajon to the Wagon Wheel Restaurant in Santa Fe Springs where he played saxophone and piano in a dance band.  But, through it all, we, the family, knew he was also a very special, spiritually inclined person.

Please do not quickly thumb through this book, or try to read it in one sitting.  There is far too much to process, even if you are familiar with the vocabulary of enlightenment.  Regardless of your progress along your own spiritual journey, I believe that you will be inspired to greater heights of your own Secret Splendor. You may have put your toe into the pool of mystery and found it to be too cold or too hot.  Chuck can gently show you that the adventure is worthy of your entire life.